Esports is a billion dollar industry - why is the legitimacy of esports still a topic in 2021?

As Sweden fails to acknowledge esports as an elite sports event, Valve look to host The International 10 elsewhere.

Every year since 2011, millions of Dota 2 fans gather in early August to spectate the most prestigious and well-paid esports competition - The International. In 2020 however, the event, which was supposed to be held in Stockholm, Sweden, for the first time in its history, was postponed due to COVID-19 with no replacement date given. Earlier this year it was revealed that The International would once again kick-off in August 2021, with the location still being Stockholm.

On Tuesday 22nd of June, Valve alerted the esports community via a blogpost that their plans to host The International 10 had hit a roadblock. The Swedish government (who have since been ousted in a no-confidence vote) were allegedly unwilling to give special permission for the event to proceed because esports was not accepted as an elite sport discipline within their sports federation (a corroborating and more detailed interview with the chairman of the Swedish Esports Federation’s Chairman is available here , and Google Translate does a good enough job to interpret the Swedish).

Here’s the issue: the participants of The International’s visa permission heavily rely on the elite sport validation, why the decision of the Swedish government ultimately disallows for the event to take place. 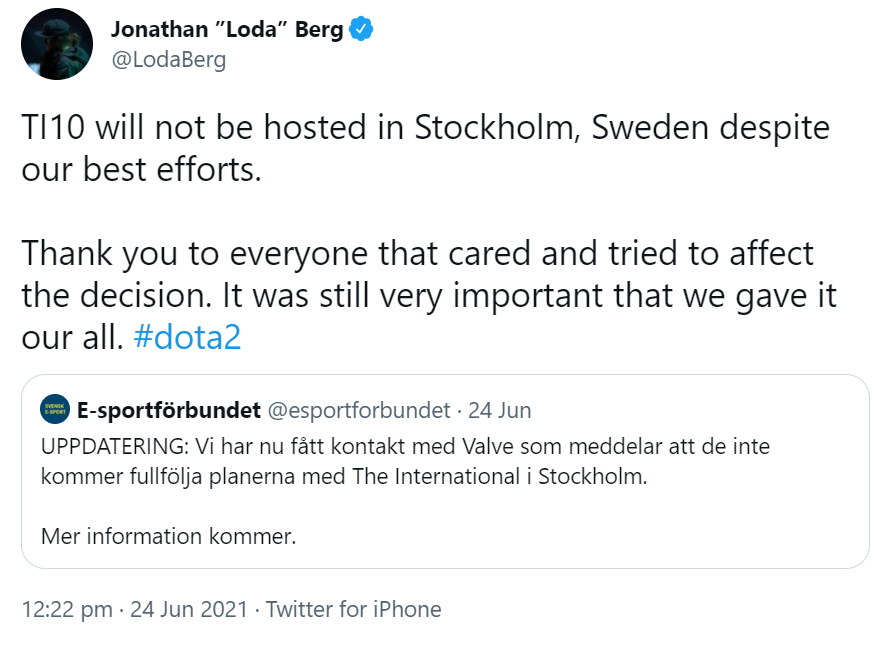 Sweden's loss will be another country's gold mine

Sweden holds a rich esports history of hugely successful teams, such as Alliance, Ninjas in Pyjamas, who have brought home a variety of esports titles, to some of the most iconic players in history as Adam “Armada” Lindgren (Super Smash Bros.), Martin “Rekkless” Larsson (League of Legends) and Jonathan “Loda” Berg (Dota 2).

Chiming in on the matter is Jonathan “Loda” Berg, one of the legendary players of the game. He won The International 2013 with his all-Swedish lineup in The Alliance - now a multi-gaming organization competing in five titles. He has been trying to provide assistance in resolving this issue between Valve, Swedish politicians, and the various Swedish bodies and associations. In an interview with Expressen he reveals that he is pessimistic about the future of esports in Sweden - indicating that Alliance as an organization are even looking to relocate to another country as a result.

“I don’t understand it on so many levels,” Alliance CEO and Dota legend Jonathan “Loda” Berg said to Expressen. “TI is the world’s largest esports event. Other countries beg and ask to be the host nation and Sweden says no. We have been fighting for this and seeing it as the light at the end of the tunnel for almost two years.”

Perhaps he will consider Denmark; a country where the former Prime Minister has played games with Danish teams bootcamping, attends esports events, and in 2018 during the BLAST Pro Series even proclaimed “ You are truly sportsmen! ” to the competing esports stars.

However, one has to wonder what state the Swedish esports scene will be in with their greatest esports teams being forced to leave, and young talents no longer seeing a future in esports, all because of out-of-touch decisions made by their government.

As the news of TI’s woes broke, fans and tournament organizers from around the world began advocating for The International to come to their city. As with many countries around the world COVID-19 has had a devastating impact on their local tourism industries, event venues, sports sectors, and more. The Swedish government themselves initially allocated € 150M in 2020 for their sports sector to prevent financial ruin of sports clubs and associations, and there’ve been proposals since to increase that amount.

That same government now no longer seems to be interested in a sporting event of great magnitude, which would provide significant economic benefits for the host city -  even with strict regulation on topics such as vaccination requirements, spectator seating, isolated bubbles, and more. These conditions have become standard for sporting events over the past year - and Dota 2 has already had two greatly successful Major events under these conditions, in Singapore & Kyiv. Building on the success, the events have paved the way for the lucky city which will now hold the honor of hosting the biggest event in the esports industry.

As a billion dollar industry, esports experienced a turbocharge of growth due to Covid-19 and is forecasted to a viewership of 495 million this year alone.

With that in mind, it truly seems that Sweden's losses here will lead to significant gains for another country.

And as the old saying goes: One man's trash is another man's treasure.​