In this post we discuss “the relativity of game time”, a phenomenon that everybody should know, who is wagering money on esports.
Don’t worry if you hate physics, the topic it's not related to the famous “general theory of relativity” from Einstein - but it's about the broadcast delay for esports matches.
Maybe you have experienced the following phenomena while watching a soccer match on your cable tv. You are watching the match just to be suddenly confused by “Goal!!!!!” shoutings from your neighbors apartment. Just 10 seconds later you see the goal happening on your TV too. What happened? Your neighbor might have a satellite dish which has a time advantage of up to 20 seconds versus cable TV. So he just saw the goal happening 10 seconds more early. This effect is caused by technical reasons - the cable TV signal is often feeded from the satellite signal and has an additional delay.
So if you think of live betting on a match: While 10 seconds isn't much, your neighbor and your bookmaker with satellite TV have a small but persistent knowledge advantage over you. They know some seconds before you what happend, which can  make a big difference in some situations as a penalty shootout.
But for esports everybody is watching the match on Youtube or Twitter, so nobody has an advantage - right? Unfortunately it’s the opposite!
In esports the broadcast delay is even larger and can reach up to 5 minutes. This sounds huge and indeed it will have a significant impact on the outcome of your bets. I learned that, as I took my first steps into esports betting. I wanted to place a live wager while watching the match on Twitch. I was wondering why the markets kept locked until I found out that the match was already finished - while I was still watching it.
On a site note: User experience of most sports betting sites is still very bad, might be a topic for another blog post.
So what’s the reason for the huge delay? If you look at the graph below, you will see that the biggest part of the delay is added intentionally (integrity delay), while a smaller part is caused by technical reasons (buffering and encoding/decoding).
The integrity delay is added by the tournament organizer to avoid that somebody from outside is able to influence a match by giving crucial information to a team. The added delay is typically set to a value between 20 seconds (on-premise matches) and 5 minutes (online matches). 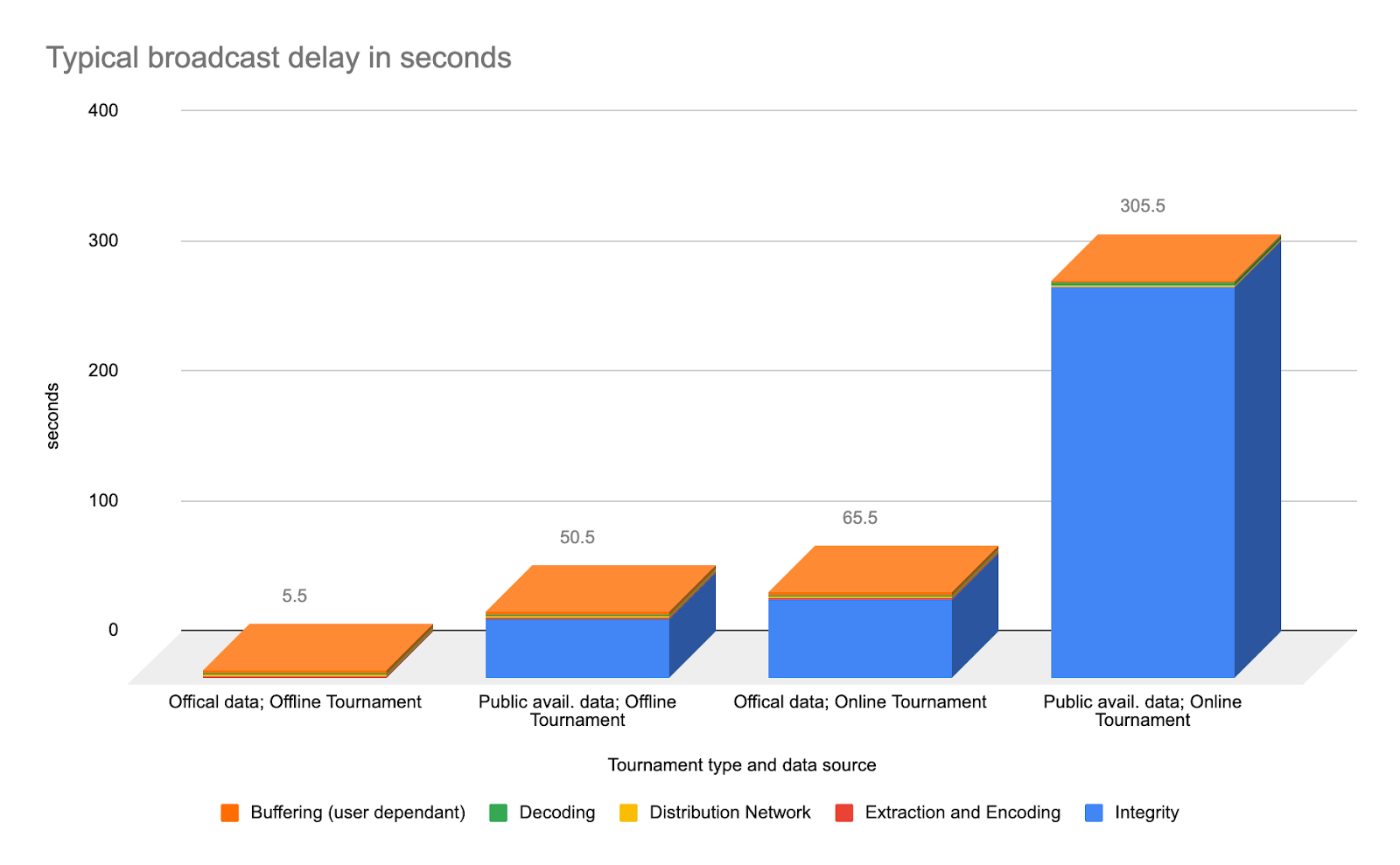 So you know now that the public video stream you are watching is usually somewhere between 25 seconds and 5 minutes behind reality. But how-about the odds, score and streams on the bookmaker’s site?  That depends on the information source of the bookmaker:
Official data source: The bookmaker or its service provider have licensed official data and video streams from the tournament organizer. The integrity delay is usually zero causing an information advantage of 20 seconds to 5 minutes compared to public information. The data streams are extracted directly from the game server which provides more data points and a higher accuracy.
Public data source: The bookmaker uses public information for trading. For example they use computer vision to extract the data from Twitch or another public source. In this case the full broadcast delay is applied and the data points and accuracy is limited.
Our advice: If you want to avoid taking decision based on outdated information, you should choose a bookmaker who:
Works with officially licensed data.
Provides you with non-delay information, e.g. scores, statistics, or even better with a non-delayed video stream.
If you have any questions or comments feel free to contact me.
The Author:
Martin Dachselt is the CEO of Bayes Esports Solutions